Our interests
Linear Ubiquitination in inflammation, cell death and autophagy

We are interested in ubiquitin – a dynamic modification that diversifies protein function by altering any of a number of features, including structure, stability and interacting partners. Given its broad range of effects and substrates, protein ubiquitination regulates and coordinates many biological processes at the molecular, cellular and organismal levels. Our group studies how ubiquitin networks control inflammation, cell death and autophagy. We use multiple approaches to tackle this question, from biochemistry techniques to genetically modified animal models. Ubiquitin molecules link together to form chains with different topologies on their target proteins, depending on which enzymes link them together. These different topologies recruit distinct complexes and effectors that specifically regulate various aspects of physiology. We are particularly interested in understanding the mechanisms and biology of a non-classical topology: linear ubiquitination.

LUBAC is thus far the only ligase known to generate linear ubiquitin chains. LUBAC consists of 3 proteins (HOIP, HOIL-1L and Sharpin) (Figure 1), all of which are important for the adaptive immune signaling cascade, namely TNF-induced NF-kB activation, cell death and autophagy. Mutations in HOIP and HOIL-1 are associated with autoimmune disease as well as myopathy in humans. In mice, knockout of HOIP and HOIL-1L leads to embryonic lethality, whereas Sharpin-deficient mice suffer from systemic inflammation. In addition, we previously found that the homologous Linear Ubiquitin E3 Ligase (LUBEL) in flies regulates heat tolerance. We use mouse models to understand how these biological functions are regulated by the linear ubiquitination enzymes/complexes. 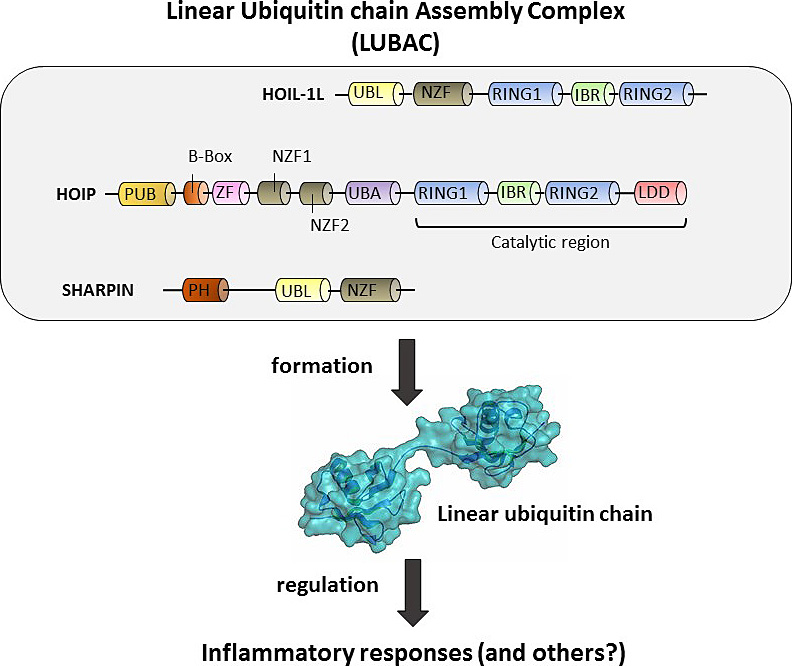 Projects
Mechanisms of linear ubiquitination by the LUBAC ligase complex

In mammals, linear ubiquitination plays an important role in the immune responses and cell death. In human patients who suffer from autoimmune disease and myopathy were found to have mutations in genes responsible for the LUBAC components. In mouse models in which LUBAC component is deficient, apoptosis is abnormally increased. For example, apoptosis in multiple organs is increased in deficient mice of a LUBAC component Sharpin. By contrast, knockout of the LUBAC component, HOIP or HOIL-1L in mice leads to embryonic lethality accompanied by increased apoptosis in various tissues. While the involvement of LUBAC-dependent linear ubiquitination in the regulation of apoptosis and immune responses is clear, it remains to be understood how each LUBAC component regulates these events. Moreover, the roles of LUBAC in biology besides inflammatory responses and cell death remain largely elusive (Figure 1). We aim to understand the biological roles of linear ubiquitination using biochemical and cellular techniques coupled with genetically modified mouse models.

Ubiquitination and ubiquitin enzymes in autophagy

Autophagy is a pivotal lysosomal degradation pathway that protects cells from nutrient deprivation, as well as several other stress conditions. To ensure rapid activation, but at the same time to avoid degradation of essential material, it needs to be tightly controlled. One key mechanism to regulate autophagy is posttranslational modification of autophagy players with the small protein ubiquitin, ubiquitination (Figure 2). Even though ubiquitination is crucial for autophagy regulation, to date, only a handful of ubiquitin enzymes including LUBAC have been identified and characterized to regulate autophagy. In this project, we aim to characterize ubiquitin enzymes and their role in autophagy. In this way, we aim to broaden the current knowledge of how ubiquitination contributes to autophagy regulation. 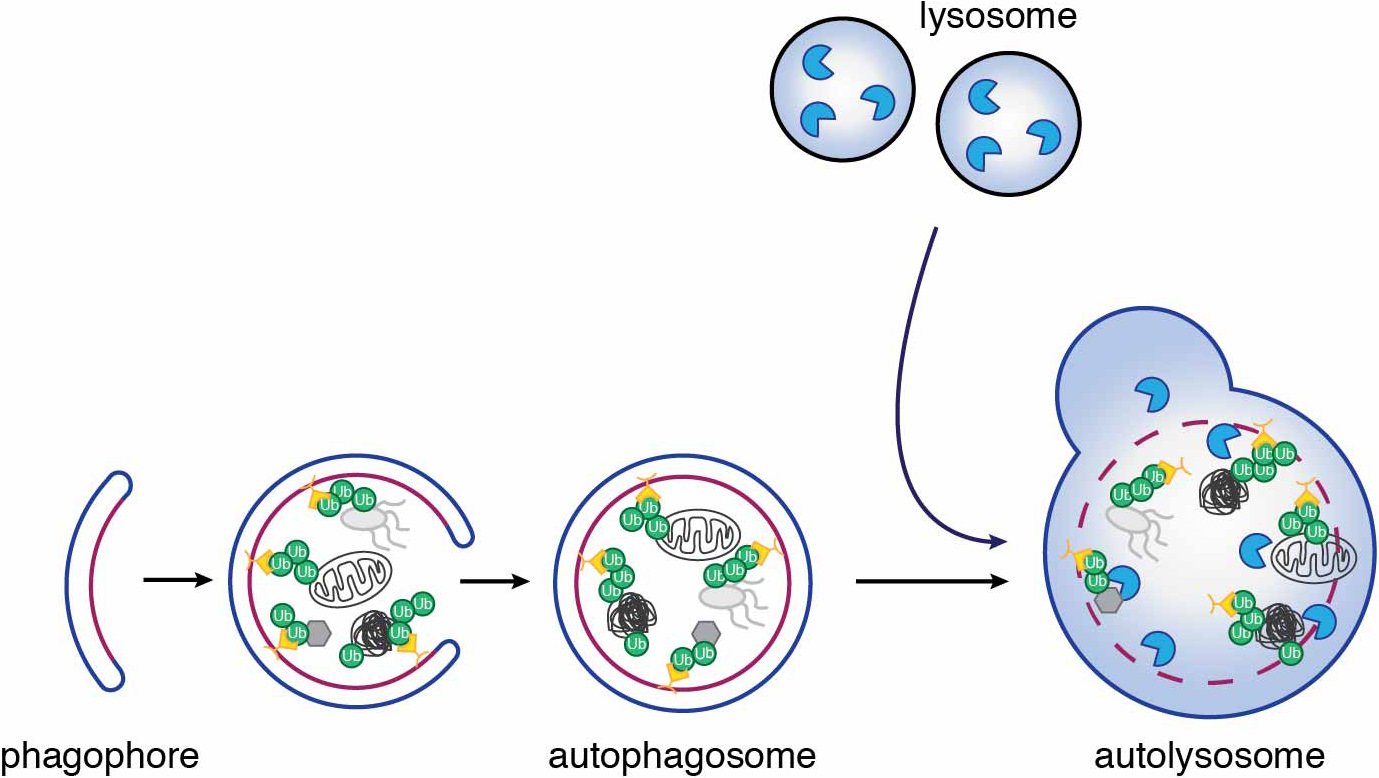